“The Lord of the Rings” & the Book of Mormon

“The Lord of the Rings” is my favorite movie series of all time. For me it combined all the elements of a blockbuster movie including likable heroes, evil villains, acts of courage, horses, moral dilemmas, triumphant victories, the absence of foul language and did I mention horses? But I must admit, I did not anticipate the perspective and context it would provide me in visualizing the war chapters in the Book of Mormon. Maybe you had the same experience.

The enemy in “The Lord of the Rings: The Two Towers” is Saruman and his horde of Uruk-hai. The Uruk-hai marched out on the offense to take control of Helm’s Deep and destroy the people of Rohan. The Rohan people were merely trying to defend themselves, their families and freedom. The Uruk-hai spent immense time and energy preparing for this battle building strategic devices for the destruction of humans.

In preparation for the intense battle for Helm’s Deep, King Théoden commands, “every man and strong lad to take up arms”. It was almost too much for me to watch a mother placing an oversized helmet on her young son’s head knowing she was sending him into battle for the first time and that he would most likely not return. But she also realized that not preparing him to fight the enemy would end in the same outcome for them all. I have three sons under the age of 13 and I can’t imagine anything more heart-wrenching than placing helmets and oversized weapons in their hands and sending them off to fight a ferocious and blood-thirsty enemy, twice their size!

Before the battle began, King Théoden ordered, “Send the women and children to the caves” for their safety and protection. This mother had to wait in the cold, dark cave hoping her son would return; or, wait to be attacked by the enemy if they broke through the defensive line; or wait to hear the cries of victory. She was powerless to defend her son, and powerless to fight the enemy. As a mother of six children, it terrifies me to imagine sending my husband and three sons into battle while my three daughters and I retreat to the caves. I’ve seen my boys play fight with their Nerf swords. They wouldn’t stand a chance with real weapons.

The king’s niece, Éowyn, frantically approaches Aragorn pleading, “Let me stand by your side!” But Aragorn firmly explains that she must go with the other women and children into the caves. She reluctantly obeys while unintentionally exposing her true feelings of affection for him.

While watching these scenes I couldn’t help but wonder if this is what it was like in the war chapters of the Book of Mormon. No sooner had I asked that question then a flood of chills ran down my back as I realized how similar in emotion and intensity they must have been.

As the battle for Helm’s Deep continued, the enemy’s careful preparations and tactics for entering the city through it’s weakest and most vulnerable spot allowed them to push King Théoden and his men further back into the fortress. Realizing they are trapped and facing certain annihilation, King Théoden and Aragorn have a heated discussion. King Théoden laments, “So much hate! What can men do against so much hate?”

Aragorn ponders for a moment, and, as if receiving inspiration from a higher source, says solemnly, “Ride out with me!”

King Théoden firmly responds, “Let this be the hour when we draw swords together!”. As they prepare to go out to battle for the last time, the first rays of dawn’s warm light come pouring through the keep’s highest windows. As the light touches on Aragorn’s face he remembers instruction given to him by Gandalf. Gandalf had told him, “Look to the east on the morning of the third day and I will return” (hmmm…remind you of someone?). With renewed confidence and resolution Aragorn leads out with King Théoden through the opened gate into the front lines of the enemy. As they look out on what appears to be numberless Uruk-hai set on their demise I couldn’t help but feel completely hopeless at how these few men could possibly defeat such overwhelming evil.

Then Aragorn looks to the top of the East mountain and sees Gandalf on his beautiful white stallion (riding without a bridle I must add) glowing brighter than the morning sun. He is joined by Éomer and his large army of riders coming to their aid. As they come charging down the mountain towards the sea of Uruk-hai, the rising daylight breaks over the hill and blinds the Uruk-hai as it reaches under their helmets. Gandalf and his army almost effortlessly break through the Uruk-hai and send them retreating into the forest of man-eating trees behind them. Again chills ran down my spine as I considered the power of light over darkness. It was so simple yet so powerful, a shining beacon of hopeIn the war chapters, the Lamanites want to “…bring [the Nephites] into subjection to the accomplishment of [Zarahemnah’s] designs. For behold, his designs were to stir up the Lamanites to anger against the Nephites; this he did that he might usurp great power over them, and also that he might gain power over the Nephites by bringing them into bondage.” (Alma 43:7-8)

“For they (the Nephites) knew that if they should fall into the hands of the Lamanites, that whosoever should worship God in spirit and in truth, the true and the living God, the Lamanites would destroy.” (Alma 43:10)

“…therefore, if they should fall into the hands of the Lamanites they would be destroyed.” (Alma 43:11).

In our day, the evil, ferocious and relentless enemy, Satan, wants to destroy our physical bodies, end our mortal existence and bring us into spiritual bondage to make us miserable like him.

In “The Lord of the Rings” and the war chapters of the Book of Mormon, the men and boys would go off to fight the enemy and send the women and children to the safest available place. A young boy would go to battle before a mother would be expected to, or especially a young girl. But in today’s battle men and women must fight side by side as the enemy is no respecter of persons. Women and girls have to wear the same spiritual armor worn by boys and men. Our spirit-defending armor includes faith, honor, discipline, respect, humility and love. Rather than retreating to the safety of caves, my daughters and I fight along side the men in our family. And in some ways I think we are able to recognize some of Satan’s tactics before the boys even see them coming.

Now, let me be clear, I am not advocating that all gender differences be ignored for the sake of equality! I believe in good old fashioned chivalry and am bothered by the lack of it in our current society. I love the fact that the men wanted to protect the women from having to fight in the physical battle out of love and respect. But when it comes to our spiritual battle, the men can’t win it for us women. We have to fight too! And spiritually speaking, we are equally strong and capable. 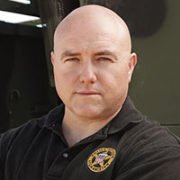 Finally there is a book that combines the epic grandeur of “The Lord of the Rings” with the compelling story in the war chapters of the Book of Mormon and is meant to inspire and instruct men, women, boys and girls in our spiritual battle against evil.

Author Jason Mow, has written a fictional, epic series consisting of four books that span Alma 43-62 in the Book of Mormon. Jason is a decorated soldier and Phoenix police officer and has served his entire adult life as a professional soldier. While in Afghanistan seven years ago, he was having a hard time coping with the battle he was engaged in. He reflected on Captain Moroni and asked Heavenly Father how a 25-year-old man child could lead an entire army against an overwhelming enemy. Jason’s answer came as an epic story that played like a movie in his mind. Along with his inspired story came these three words, “Write it down!” So he did. 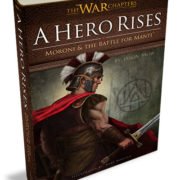 Now we have “A Hero Rises: Moroni & the Battle for Manti”, the first book in the War Chapters Series. We are hearing from early readers that it is a mix of “Tennis Shoes Among the Nephites” and “Ranger’s Apprentice” but on an epic scale like “The Lord of the Rings”. But there’s no time travel, aliens, zombies or vampires. Only real men, facing real challenges who look to God for their support.  “A Hero Rises” provides insight into the incredible stories of war and heroism found in chapters 43-44 of Alma. It is smart, original, authentic, faith-promoting and inspiring. Jason Mow uses his decades of experience in combat to infuse the story with battle and tactical details that are easy to follow, but epic in scale. Jason taps in to the deep emotional and spiritual conflicts great warriors like Captain Moroni, Teancum and Captain Lehi might have faced. Anyone who is old enough to love the Book of Mormon will love this book.

Art Illustrations from “A Hero Rises”